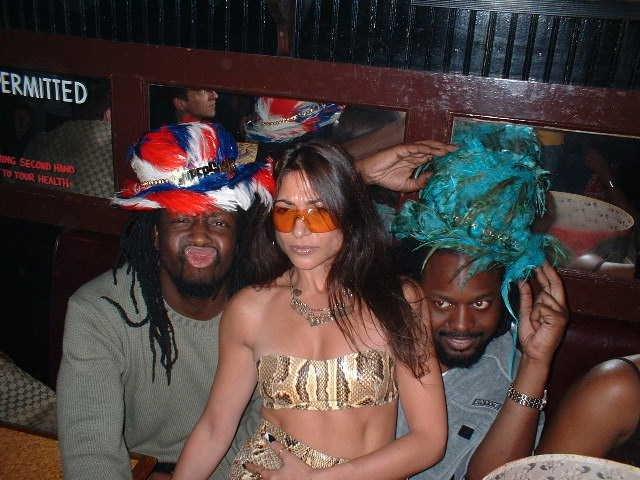 Ivy Supersonic is a force of nature. She is a woman on a mission: to inspire the people of the world into realizing their own potential for freedom and happiness. Literally the woman of many hats, the magical hatter, her multidimensional personality gives her the unique ability and insight to spread her positive message around the world via her “It’s All Good” Campaign, her magical feathered hats, her electrifying runway affairs featuring living works of art, her SQRAT cartoon character, and by whatever other means she can. Her creative energies are explosive and visionary. Ivy recently received the trademark for Sqrat, a cartoon character Fox has used in their Ice Age movies and shorts, and that has been the center of merchandising, marketing, and other products for the last 15 years. Ice Age/Scrat is the biggest international cartoon in the history of the world.

A multi-talented designer of fashion, art, music, entertainment and marketing, Ivy Supersonic is a catalyst for the creative, motivated and talented. She is also a high-voltage events producer of the fun and outrageous. Her friends and associates extend from grass roots to the very top of the entertainment industry food chain. She is a style guru and publicity powerhouse. She has thrown events for Gene Simmons, Crosby, Stills & Nash, Wyclef Jean and hired by Robin Quivers for Howard Stern’s Birthday. As a couture hat designer to the stars, she has designed hats for Pamela Anderson, Snoop Dogg, Hillary Rodham Clinton, Monica Lewinski, Debbie Harry, Scott Weiland, Carmen Electra, Tommy Lee, George Clinton, Kat Von D, Aretha Franklin and many, many others. Ivy’s most celebrated for her large pink feathered chapeau she designed for Pamela Anderson hosting the MTV Awards with Carson Daly in 1999. Ivy’s feathered hat designs are as glamorous as they are eclectic.

Her global media coverage includes features on Howard Stern, VH1, MTV, Fuse, Miami Ink, Wild On E!, Fashion Television, CNN, The Apprentice and numerous other networks and shows; ( http://ivysmedia.com/ivid/ ) Ivy truly specializes in pushing limits that provide the ultimate in organized chaos. Many bands and their mates such as; Live, Blink 182, Kid Rock and Anthony Keidis have joined her fashion extravaganzas turn into media-frenzied events and as well wind up in live stage events such as at Jones Beach Theatre with Steve Kingston and KROCK with Stone Temple Pilots and Limp Bizket and at Irving Plaza with Methods of Mayhem.

Having graduated from the Fashion Institute of Technology with a B.S. Degree in Marketing and Public Relations, Ivy’s career began during her college years, when she launched her denim collection I.B.I.V. The jeans, whose sheer audacity impressed then-Vogue fashion Editor Elizabeth Salzman, have been described as modish and edgy, embodying the energy of the sixties. Within three months of their launch, the jeans were featured on the cover of Women’s Wear Daily. Once she and her designs had achieved instant notoriety, designers scrambled to embrace her new trend and she single handedly changed the market place with her fashion forward designs. After her designs had made their way into the mainstream, they were featured on MTV, Beverly Hills, 90210, Coca-Cola Commercials and Good Morning America.

Ivy Supersonic has been working with talent, artists and artists management since 1996 on special events, in public relations; booking, promotions, consulting and forming strategic alliances. She is owner of the New York State Trademark “Bad Ass New York” and launched the cool t-shirt line December 2015. It can be viewed at www.BadAssNY.com Ivy Supersonic’s creative philosophy has and will continue to be new, fresh and infinitely applicable. Quite simply, she pushes creative boundaries. Down for Whatever, Whenever, Ivy is a woman with purpose on a quest for the new, the fresh and the inspired.